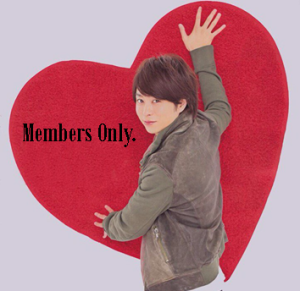 This community is locked as Members Only page and it's all about subbed videos. If you want to join, read these following rules:

☆ DO NOT UPLOAD OUR SUBBED VIDEOS TO ONLINE STREAMING SITES like Youtube, DailyMotion, Crunchyroll, Veoh, etc.
☆ DO NOT HOTLINK, DO NOT CREATE MIRRORS, just directly link to this post.
☆ DO NOT RE-UPLOAD and POST our subbed videos outside this community
☆ DO NOT SELL or DISTRIBUTE the videos in anyway, anywhere.


We just ask for you to follow very simple rules, so please stick with it

We fully realize that we are lacking the time to approve your entire joining requests right away. So, please follow these steps:


Step 1
READ THE RULES. Leave a comment in this Membership section.
Please tell us a bit about yourself / your origin (please specify the country)/ How you found out about AngelDevils.
Please show that you AGREE AND PROMISE to follow all of our rules stated now or in advance, in your own words (we don't accept copy and paste).

Step 2
Please be aware that we ONLY APPROVE LJ ACCOUNTS who have AT LEAST 100 POSTS (including posting and replying to posts). You can check here on how to check yours.
If you PASSED our passing requirement then you can send your joining request by clicking the Join button at the top left of your page

Step 3
Wait for our approval or rejection

DO NOT spam us with your join request again and again if you still haven't received LJ's notification. Please wait patiently

All people have rules, so please appreciate and respect them

Hello Friends~
After the SOPA and PIPA roar over last couple of weeks until the Megaupload shutdown case, here comes another threat called ACTA

What is ACTA?
ACTA is the Anti-Counterfeiting Trade Agreement. A new intellectual property enforcement treaty being negotiated by the United States, the European Community, Switzerland, and Japan, with Australia, the Republic of Korea, New Zealand, Mexico, Jordan, Morocco, Singapore, the United Arab Emirates, and Canada recently announcing that they will join in as well.

Why should you care about ACTA?
Initial reports indicate that the treaty will have a very broad scope and will involve new tools targeting “Internet distribution and information technology.”.
In short, with ACTA, they could allow corporations to censor the Internet. Imagine if your ISP could censor their networks, police what you did online, and with greater ease turn your information over to authorities. That's the danger that ACTA poses, and it's got to be stopped.

What should we do to stop it?
Though several countries have already signed this treaty, the European Parliament still has to vote on its approval. If they vote NO, it will totally dismantle ACTA and send it back to the drawing board.
One way to stop it, besides going and making a huge demonstration, is to help sign petitions. There are many sites provides various petitions with one goal, SAY NO to ACTA. Some of them are:
1. Via Tumbrl
2. Via Avaaz

The European Parliament will vote in June, so we still have time. If you think by signing the petition is worthless, please re-think again. SOPA and PIPA being postponed is proof of what global citizens can do (yes, it's not only about USA citizens)

So please take action now, and Say NO to ACTA. It is essential to spread awareness and get the word out on ACTA.

Dear members...
Have a great day for you all

First of all, we would like to thank you for your patience and your loyalty waiting for our relases though we don't do much this year for some cicumtances.
And now, among all of our bussiness, someone came and told us about streaming case again. Tiring, really, but we hope you wont get too tired to help us clearing this mess.
One of our member here (really appreciate her) reported that our vidoa being uploaded to (again and again) Dramacrazy.net trough Youtube link.
Since they are Youtube links, then we maybe can fix this and for it, we need your help.
For each link in Youtube, when you open it, you'll find FLAG button under the video. Please click it to categorize the video as unappropriate.
By doing it, you've helped us a lot.

and in Dramacrazy, in case you have an acc there, you can check this page:

We'd really appreciate for your positive response about this thing.

Sorry, it's not our #100 release post. We're here to announce 2 things.
First, we need your help to speed up our subbing pace. As you see, we’ve been on hiatus for three months due to being busy in real life. So to keep this subbing community alive, we’re deciding to add to our team members in these positions:

If you are interested in helping, please email us at angeldevils.sub@gmail.com with the following format:
Subject: APPLY [DESIRE POSITION] (ex. APPLY [Spot translator] )
Body: Introduce your name, where you are from, what makes you want to apply for the position

IMPORTANT NOTES:
a. We will give you some tests before deciding
b. Make sure that you are not a member in another active sub team.

Secondly, we're glad to announce that we're re-opening our membership. For details and how to join, click here This community is locked as Members Only page and it's all about subbed videos. If you want to join, read these following rules:
☆ DO NOT UPLOAD OUR SUBBED VIDEOS TO ONLINE STREAMING SITES like Youtube, Crunchyroll, Veoh, etc.
☆ DO NOT HOTLINK, just directly link to this post.
☆ DO NOT RE-UPLOAD and POST our subbed videos outside this community
☆ DO NOT SELL or DISTRIBUTE the videos in anyway anywhere.
We just ask for you to follow very simple rules, so please stick with it

We fully realize that we are lacking the time to approve your entire joining requests right away. So, please follow these steps:

Step 1
Leave a comment in this Membership section.
Please show that you agree and promise to follow all of our rules stated now or in advance
Please be aware that we only approve those who have at least 100 posts (including posting and replying to posts)
Step 2
Send your joining request by clicking the Join button at the top left of your page
Step 3
Wait for our approval or rejection

DO NOT spam us with your join request again and again if you still haven't received LJ's notification. Please wait patiently

All people have rules, so please appreciate and respect them

Hello community members. We hope that everyone is safe and sound. We're sure that you have all heard of the earthquakes and tsunami that have devasted Japan and hope that you will join us in praying for Japan. With this in mind, we would like to alert everyone to http://www.redcross.org/ where you can donate money to the cause by clicking on "DONATE FUNDS" in the upper right corner. They accept credit cards and amounts of over $10. Alternatively, you can text "REDCROSS" to 90999 to make a $10 donation, which will appear on your phone bill. If you are able to donate, it would be really amazing if you did. Even if you can't, please just keep those who have been affected by the disaster in mind. Thank you.

At this moment, we are unsure of what else we can do to help. If you have any ideas, please do comment with them.

Edit: Oh and also, if you have a tumblr, there are posts such as this and this that you can reblog.

Regarding the membership matter, as we have stated before here, we would like to inform those of you who applied before Feb 3rd to check your Invitation page. If you have no idea where to go, please check here.
Because LJ deletes the join requests after 30 days, we only invited those of you who applied for membership 30 days before February 3rd and did the step one correctly. If there is no invitation from us, it means there were mistakes in your application request.
Sorry that it takes us so long to respond and please DO NOT PM our maintainers to gain a new membership.
Thank you.

Happy Chinese Year for you who celebrate it ^__^

But it seems that what we want to inform you doesn’t match the happiness shared on this beautiful day.

First, we would like to thank our member who informed us about our file  (ANS 118) being re-posted on Dramacrazy. This is the “can’t tell anymore” times our subbed files re-posted and streamed outside the community and it’s against the rules here. We’re getting tired of this issue now. Yet Megavideo gives us another issue because it automatically puts the video we’ve uploaded in whatever type (.avi nor .mkv) to be able on streaming.

So, based on these problems, we’ve decided:

Please help us to get our file down from the site there and if you found any of our files on Megavideo, please do us a favor by deleting it from the site.

Here is the way to do it:
1. There is a "show detail" icon beside the "search" icon when you drag your cursor on the video.
2. Click "flag it as inappropriate" -> close
3. Then find a cloud-like icon beside the TV icon to leave comment to take the video down.

I hope this will work and hopefully it's not only people who have MU account can take this action and this re-posting matter will stop here so we won’t take farther action on members for some who don’t follow our rules. We’ll keep on watching this thing.

We decided to create a twitter account! If you have one as well, we'd love for you to follow us, @AngelDevils_Sub (but we'll still love you even if you choose not to ;) ).

Also, we have decided to continue uploading to mediafire. Remember, if there's ever an occasion where a file has been deleted, please contact us so that we can re-upload it as soon as possible. (:

That's all for now~

Please look forward to next week's release!
and have a wonderful winter break/holiday. ♥

We're having another issue with streamers. This time, however, it's on Dramacrazy.
They've uploaded many AnS episodes without permission, and one of them is ours: http://www.dramacrazy.net/japanese-variety/arashi-no-shukudai-kun-episode-43/.
Please help us in getting these links removed--we're not really sure about how DC works, but we do know that there have been a lot of problems with them and streaming in the past.

Thank you so much to all of you have kept an eye out, as well as to everyone who has respected our rules. :)

Edit: And now they are uploading our VS Arashi http://www.dramacrazy.net/japanese-variety/vs-arashi/